I finished my testing and results are in!
I tested the Biohome Ultimate (the smaller version, with the added minerals) same way as the Biohome mini. Two buckets; one control bucket, 8 quarts of water buffered to 7.0 and a second bucket of buffered water (8 quarts) containing the Biohome Ultimate. This time I only added 4 ounces of Biohome instead of the whole 500 gms. I did rinse the Biohome media quite well in RO water to remove any dust, which I think is important. Since the media sucks up water so rapidly, I’m thinking that it would be advisable to recommend tank water or RO water to rinse the media. At the very least, dechlorinated water.

Both forms of Biohome (one with added minerals and one without) both raised the pH of the buffered water approximately 0.2 points. The water was buffered with a strong phosphate based buffer. You’ll recall that when I initially added the whole 500 gms of Biohome to 8 quarts of buffered water that the pH rose over 1.0. Almost all tanks contain more than 8 quarts of water, unless it’s a nano tank. Even then, one wouldn’t normally use this much bio media as the filters in these tanks are small.

Since the test, I’ve completely filled one tray of my Fluval 206 canister on my 20 gallon planted South American tank with the Biohome mini. It has been in there for almost two weeks and no change in ph. The ph in this tank is a stable 6.6 due to all the driftwood. The second tray in this tank’s canister filter contains SeaChem matrix which I will eventually switch over to Biohome.

The pH issue with my 50 gallon was due to a buffering problem. It is now stable at around 7.2 and I feel confident about adding the Biohome Ultimate back into this tank’s canister filter.

So, unless someone adds an extremely large amount of Biohome to their aquarium, there should be only a small rise in ph of around 0.2. For someone with extremely sensitive fish like Rams, I would probably only switch over a small amount of media at a time. In a 20 gallon tank there should be no problem adding 2-4 ounces a week. On my 20 gallon which has a high bioload, the pH went up for a couple of days after adding the rest of the Biohome mini, maybe 0.1 point in ph. This tank is heavy in tannins. In another tank, it may have gone up the full 0.2 points, which is no issue for most fish.

I added about 4 ounces of Biohome (mini form of Ultimate) to a 10 gallon quarantine tank I’m cycling. The filter is an Aquaclear 5-20. The pH in this small tank rose from 7 to 7.2 and for the past week has remained stable at 7.2. There is one plant and inert sand substrate in this tank. Once the tank has matured, I’m sure that the pH will come back down.

I have another question concerning chemical filtration and it’s effect on Biohome. I know that Richard likes carbon and advises against Purigen, especially after its been recharged with chlorine. Any feedback on chemical filtration products such as Chemipure green (which is not rechargeable) and is not suppose to mess with nitrate levels? I like how it keeps my tanks healthy. Even though I’m a fanatic on water changes and canister maintenance, I’ve noticed more robust health in my fish since I’ve been using Chemipure green. I don’t want to do anything that will prevent the anaerobic bacterial colonies in the Biohome a chance to grow and start consuming nitrates. Just wondering if you’ve gotten any feedback on using this product with Biohome.

Thanks again Don! I hope this puts to rest any pH concerns with Biohome. Thank you for the Biohome mini and bacteria starter!!!!

And shortly after a follow-up:

Here’s photo documentation of Biohome Ultimate. I used the 7/28 test tube to compare future readings. The pH readings up through yesterday did not fluctuate and remained stable. Sorry, I’m limited in test tubes as I’m cycling one tank and running multiple others. The only thing I didn’t test for was hardness, but I haven’t seen any major fluctuations in my 20 gallon with the Biohome mini. 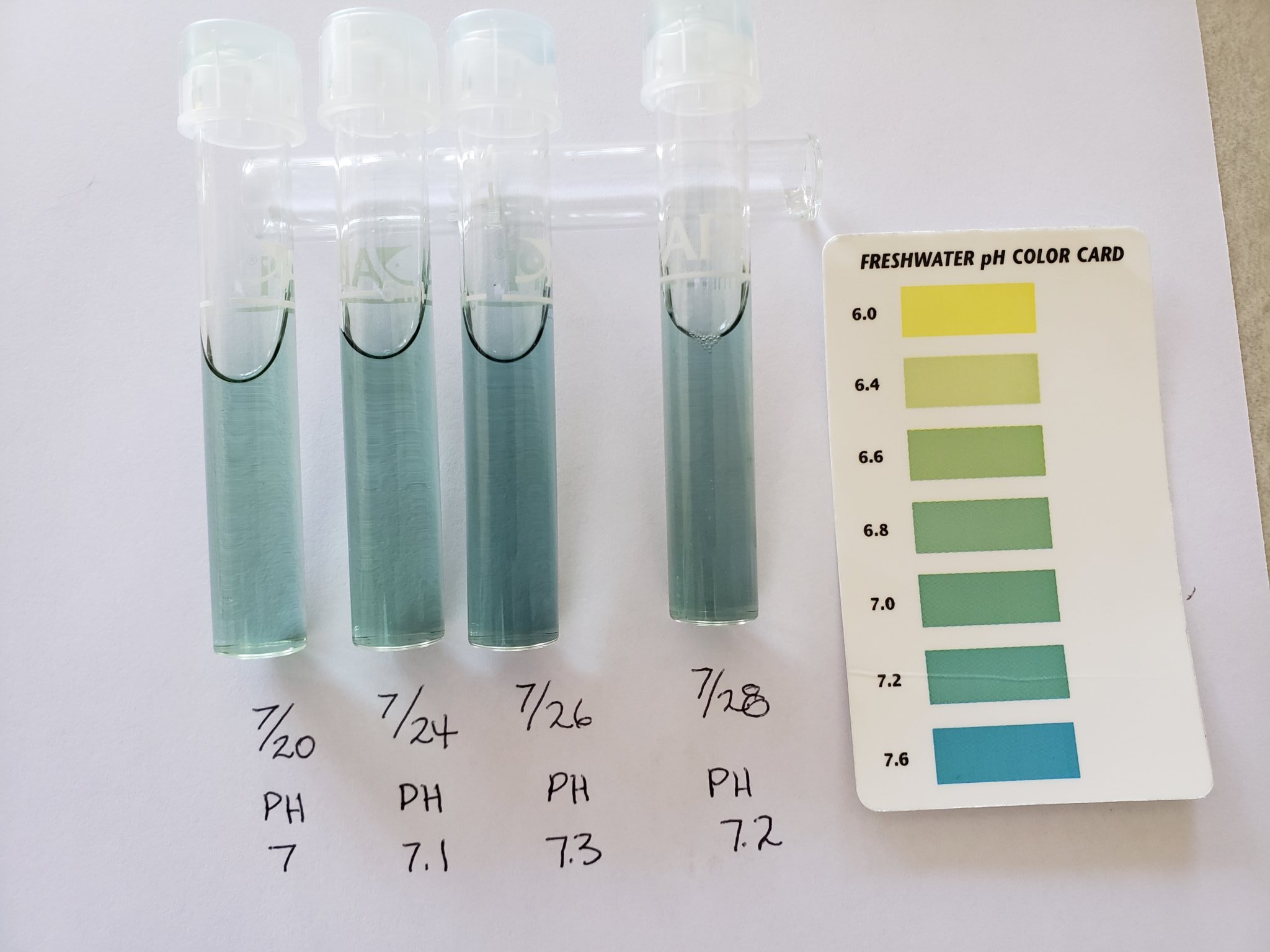